Patricia & Jerry Hernandez’s daughter is best known for having been a member of the all girl group from 2013 until their indefinite hiatus in 2017. Their daughter began turning heads after auditioning as a solo contestant for The X Factor. She along with band members Dinah Jane, Normani, Lauren Jauregui, and Camila Cabello where brought back to form the assembled group Fifth Harmony. They finished in third place of the show’s second season.

The San Antonio, Texas native born as Allyson Brooke Hernandez on July 7, 1993; performed at charity events, high schools, and sporting events starting when she was just 9 years old.
After The X Factor, she released her first EP with Fifth Harmony called Better Together in October 2013. Together with her group, they have three albums under their name: Reflection, 727 and Fifth Harmony. They have also traveled the world together for their album tour and have received multiple awards for their great performance and record-breaking songs that reached 1.4-1.6 billion views on YouTube.

After breaking out as a member of the multiplatinum pop group Fifth Harmony, she signed with Atlantic Records in 2018 and is now preparing to release her solo debut album.

But all her sucess couldn’t have been achieved without the support of her makers.
Parents, Patricia & Jerry Hernandezand have been a constant source of support for the talented singer. They are also parents to Ally’s older brother, Brandon. 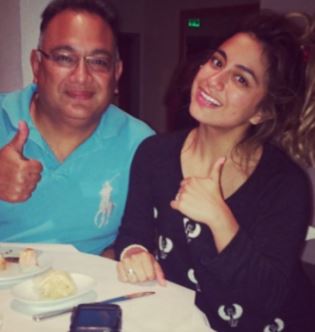 Jerry Mesquite Hernandez was born on April 30, 1963. Ally is mostly seen on the road with her dad rather than her mom due to Patricia’s back problem. Patricia Ann Castillo Hernandez, was born with scoliosis, a skeletal problem.
When speaking about her parents Ally said

I don’t even know how to put into words how thankful I am for them,” “They gave me that confidence and they sacrificed so much for me, and they supported me along the way even when it was so hard, even when I was younger and going through things when I didn’t believe in myself. And I felt like I wasn’t good enough. They were right there to support me, and encourage me, and say, ‘I believe in you.’ That is something that’s priceless and there’s no words to say how thankful I am to have them in my life.”

Thanks to her parents Latin heritage, Ally was raised in an intense passionate and proud Latin community. As a result, Brooke gravitated early to mariachi music and Tejano artists like Selena Quintanilla, as well as more mainstream Latin pop stars including Gloria Estefan and Jennifer Lopez.

The couple is currently supporting their talented daughter as she is currently participating on Dancing With The Stars. Ally is partnered with Sasha Farber.