Alix Bailey is an artist and portrait painter known for being the wife of, comedian, actor, writer, producer, director, and editor Louis Szekely best known as C.K

During their marriage, Alix Bailey and Louis welcomed two children, Kitty Szekely and Mary Louise Szekely. The couple was married from 1995 until their divorce in 2008. At the time of their divorce the couple shared their children’s custody.

Some could say Alix dodged a bullet since her famous ex-husband is currently being accused of sexual misconduct. Amid the Harvey Weinstein scandal, many sexual assault victim are coming forward with their own painful experiences. Most recently five women have come forward revealing Louis either asked them if he could ********** in front of them or he actually did.

The Emmy award winner Louis is best known for being the writer, director and star of the hit FX series, Louie.

According to the NY Times, Corry even had to ‘remind’ him he had a daughter and a pregnant wife at home. 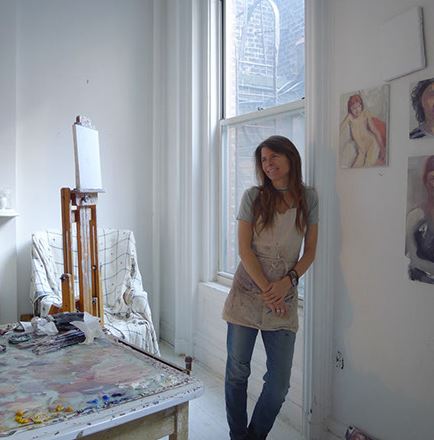 Luckily this isn’t Alix problem anymore. Find out a thing or two about her below.

Bailey was born on September 12, 1967. According to her website, Alix Bailey was raised in New Haven, Connecticut by her painter parents. Alix, who also lived for a while in Italy –followed into her parents footsteps.

She studied painting at Bennington College with Pat Adams and Sidney Tillim. She received her MFA from Indiana University. Her work has been shown in New York, Connecticut, and Italy. Alix Bailey is also a member of The Painting Center.

Alix and her husband grabbed headlines just last year when it was reported they bought a Greenwich Village apartment together. They deniftely keep in good terms. It should be interesting to know what will Alix Bailey will think about her ex-husband’s accusations.