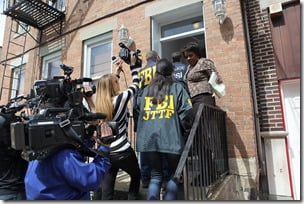 Dzhokhar A. Tsarnaev, 19, and his brother Tamerlan, have been identified as the suspects of Monday terrorist attack in Boston but we’ve learned now the family does not end there. Public records showed that a woman named Ailina shared the same name as the two suspects!

22-year-old Ailina Tsarnaev or Alina was born on July 12, 1990 to 45-year-old Zubeidat Tsarnaev and 47-year-old Anzor Tsarnaev  –she is described with both names- has accepted to be the suspects sister! FBI agents arrived this morning at her West New York apartment and although frighten at first she had no other choice but to identify herself. Alina or Aliana said that she had not seen either of the brothers in years-might have to do with the fact that her husband who has not yet been identified, is not Muslim, her brothers never accepted him and never met him- she still described them as “great people” and said she couldn’t understand what had happened.

“They were great people. I never would have expected it,”  “They are smart — I don’t know what’s gotten into them.”

She was interviewed through a slight crack in the door by reporters and when asked if she was ok, she said: Tsarnaeva seems to be aware of the great tragedy this is and can’t really come to terms on how her brother’s will be involved; Dzhokhar on the loose and Tamerlan shot dead by police officers, pretty overwhelming for anyone.

A perimeter was created when agents arrived at the Hudson County apartment building and although you would think they enter aggressively like in the movies they entered calmly after a few minutes and at around 12:30 p.m. FBI agents were seen carrying evidence boxes into the apartment.

Michael Indri, police director of West New York said she is upset but cooperative. At this point they are trying to gather all the information possible. But most importantly there are no indications or evidence she took part in the Boston attacks.

Of her younger brother, Dzhokar, Alina had little to say except,

An amazing child, a true angel –words of his father- has the entire nation frighten and Bostonians on paused as the search continues while he still on the loose. Authorities in Boston suspended all mass transit and warned close to 1 million people in the entire city and some of its suburbs to stay indoors as the hunt for Suspect No. 2 went on. Businesses were asked not to open. People waiting at bus and subway stops were told to go home.

We have a clearly an upset sister; a mortified father

“If they kill my second child, I will know that it is an inside job, a hit job. The police are to blame,” And one angry uncle,

“It is atrocity,” Tsarni said. “It’s a shame – they’re the children of my brother… Me myself and my family had nothing to do with them for a long, long time.”

“They put a shame on our entire family. On the entire Chechen ethnicity. A true tragedy for this family indeed they have lost a brother, a son, a nephew and although Dozhokhar still has a chance to turn himself in, he will pay for what they did, for what they’ve caused is beyond forgiveness.

Alina faces a trial for charges misleading police and counterfeit money investigation in 2010, but on August, 2014 she was arrested for threatening to put  bomb on a woman’s purse. Tsarnaeva wаѕ charged with aggravated harassment аnd wаѕ awaiting arraignment.