Ali Tate-Cutler is a plus size model known for backing body positivity and most recently has become Victoria’s Secret’s first plus-sized model.

Word in the media is that the brunette stunner was signed to the lingerie giant as part of its new partnership with London-based lingerie brand Bluebella.
The beauty line announced the collaboration last week, noting in a press release that the UK label -which includes plus-size models in its ads alongside skinny ones – is about “self-love, self-acceptance and championing individuality” 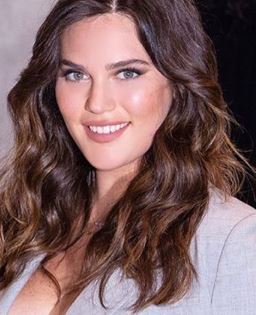 Ali herself revealed the big news writing on social media,

“At the launch today for @victoriassecret and @bluebella at their flagship store in NYC. I believe I’m the first size 14 on @victoriassecret? Regardless I’m pretty stoked to work with a brand I idolized when I was a teen. Great step in the right direction for bodies. Available online @victoriassecret and at select stores across the country and UK”

Cutler believes VS is “heading in the right direction” by putting size 14 women like her on the wall. She recently told E! News, “They are listening to their audience who have requested to see more women of diverse shapes and sizes. I think if they continue to head in that direction they will be on to a jackpot because that is reflective of what the average woman is in America.”

Ali who is a California native and is currently based in London, has been making a name for herself as a model and body-positive influencer. She previously modeled for Reformation’s extended sizing range. She also describes herself as a model, feminist, globe-trotter.

Since becoming a model, she has scored prestigious campaigns like Mango and Ralph Lauren. This beauty is not just charming and stylish, she’s also a lover of all things green and created an eco-lifestyle page, Conscious Child, to raise environmental awareness.

Tate also happens to be a married lady, her husband’s name is Sam Bridge. She revealed she met prince charming 9 years ago on a bus at 2 am in London.
Sam who was instantly drawn to her asked for her phone number and called her 10 minutes after she got off the bus. They spent the next day together and have since traveled all over. She called him her ‘ride or die’