Alexander Gilkes is a British art expert and the latest man in the life of Russian tennis star, Maria Sharapova.

39-year-old with smooth looks and well-connected, that’s definitely Alexander Gilkes the founder of Paddle8. Born July 16, 1979 in the U.K. –Gilkes is an Eaton graduate who is friends with none other than Prince Harry and Pippa Middleton. He has a younger brother, Charles, Gilkes. Their father, Jeremy, is one of the UK’s best dermatologists and his mother, Robin, worked at the University of Oxford.

Paddle8 is the auction house for the 21st-century collector, according to its website. Gilkes runs the online art auction company alongside co-founder, Aditya Julk. As an interesting fact, Princess Eugenie used to work for him at Paddle8. 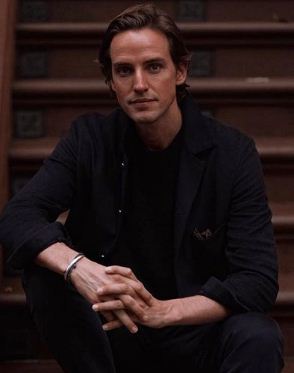 He is an Eton graduate who began his career as an auctioneer at Phillips de Pury & Company. He was also an auctioneer for the Elton John AIDS Foundation, Raising Malawi, and amFAR. And in 2014, 2015, and 2016, he was named one of the 100 Most Powerful People in the Art World. Additionally, he also featured in Vanity Fair and GQ’s best-dressed lists. And did we mention, he serves on the board of the New York Academy of Art? He does.

He may still be married to wife and CFDA/Vogue Fashion Fund finalist, Misha Nonoo. The couple tied the knot in 2012. The fashion designer met him in London and according to the NY Times, she thought he was gay when she met him over a decade ago. Nonoo is also noted for having been the matchmaker between Prince Harry and Meghan Markle. Word in the street is that Gilkes and Nonoo separated in 2016.

Gilkes and tennis star Maria Sharapova have been sharing snaps of their romantic getaway in the Costwolds. It’s not known how exactly the two met.