Alex Paez & Milagros Cowan are a married couple from south Miami who are making headlines after getting hit with animal cruelty charges, again!

Reports say, Florida authorities found three ‘horribly emaciated’ and starved horses at the home of the bodybuilding couple. Last May, Miami-Dade Agricultural Patrol officials seized the animals. According to the Daily Mail, the horses’ hooves had not been trimmed in at least a year.

48-year-old Alex Paez was charged in May after four misdemeanor counts hang on his neck. He is scheduled for trial in December.

Now, is 50-year-old Milagros Cowan’s turn, she was arraigned Friday on the same charges as her husband, as reported by NBC.

The couple travels across the country to compete in body-building competitions. Social media photos show images of their ripped abs next to their one-time healthy horses.

Milagros Cowan is also known as Milly Paez-Cowan. The couple tied the knot on August 18, 2007.

According to his Bodybuilding page, Alex was 16th place at the 2015 NPC Miami Muscle Beach Contest.

According to the Miami Herald, it is not the first time the couple see themselves in this type of problems with the law. The had similar charges dropped four years ago after completing a pre-trial intervention intervention –a program for first-time offenders. 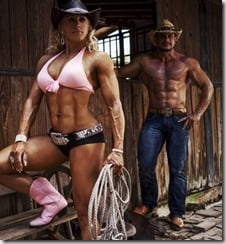 ‘There was trash and dangerous debris everywhere, all over the ground, making it almost impossible to find a place to walk without stepping on something.”

All Alex Paez’s wife had to say was, the horses were just ‘a little thin’ and their hooves were ‘not that bad’.
According to officials from the The South Florida Society for the Prevention of Cruelty to Animals, the horses have now gained a lot of weight. While the couple’s lawyer tells the new charges ‘are no big deal.”

The fitness model and figure competitor, is also a mom of five and grandmother. She calls herself a ‘farm girl.”