Alex and Betty Vinson are the parents of the African American NC police officer, Brent Vinson. Their cop son fatally shot Keith Scott on September 20, sparking another case of possible of police brutality.

Vinson happens to be the son of a military veteran who served in the United States Army. His father is also an expert in court room testimony. Alex Vinson currently owns Vinson The Investigator, LLC.

The Charlotte-Mecklenburg Police Officer Brentley Vinson, has worked for the department for about two years. Accoridng to WSOC-TV  he is currently assigned to the Metro Division.

He was placed on paid administrative leave while the shooting investigation takes place.

Alex and Betty Vinson raised their son, Brentley Alex Vinson in Charlotte. The couple welcomed their son on Sept. 2, 1990.

Vinso a former college football player, followed into his father footsteps by becoming an officer. Alex Vinson who is now retired from the force is said to be, one of the first black detectives on the Charlotte police force.

Alex and Bettys’ son played football at Liberty University from 2009-2012 and majored in criminal justice, according to his biography on the school’s website.

Vinson transferred to Liberty from Fork Union Military Academy. He started every game for Fork Union in 2008. He graduated from Ardrey Kell High School and was a Southwestern 4A all-conference defensive back in 2006.

At Liberty, he became a captain of the football team and led it in tackles as a senior in 2012.

All those close around him, including school friends and a former football coach have defended Alex and Bettys’ son. His former coach told the Observer that Vinson is ‘a natural leader who always puts the best interests of others first.’

At one point his coach had him mentor a player who had suffered a knee injury similar to the one that kept Vinson off the field his senior year. 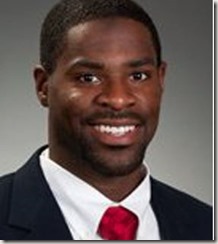 According to Alex Vinson’s LinkedIn page, he is a licensed Professional Investigator. 60-year-old Alex Vinson is also a member of the North Carolina Association of Private Investigators. He is licensed as an Armed investigator by North Carolina Private Protection Services.
Alex worked investigation for close to three decades  with Charlotte Mecklenburg Police Department, and retired as a police Sergeant . Brent’s father investigated Murders, Robbery, & Burglary

Alex and Betty Vinson 58, currently reside in Charlotte, NC. The couple have been apart of the Central Church in Charlotte for over two decades.