Debora Krasniqi is the wife of Swedish national Flamur ‘Alex’ Beqiri -who according to reports was shot and killed outside his home on Christmas Day.

Debora’s husband is said to have been killed as he and his family returned home from a night out. Reports say, Beqiri was shot in front of his wife and young child in front of his home in south London after answering the doorbell. He was pronounced dead at the scene. He was 36-years-old.

Flamur Beqiri, known as Alex; was a record label owner -and the brother of Real Housewives of Cheshire star, Missé Beqiri -who starred on the ITVBe series from March 2016 to May 2017.
Flamur had moved to the United Kingdom from Sweden in 2016.
Alex was listed as the Partner / Co Founder at 2020records. 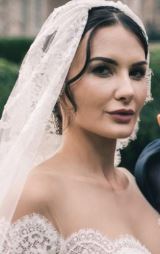 Following the shooting, the gunman immediately fled the scene on Battersea Church Road. Metropolitan Police launched an investigation into the incident but no arrests have yet been made.
His wife, Debora Krasniqi and child, were both left unharmed. The couple had tied the knot in October of 2018 in Cernobbio, Italy. According to WeddingStyle Mag, the two met through Facebook. At first they were only friends and spent countless hours on the phone. Debora actually became a close friend of his sister and it was at her wedding where they connected. Speaking about the proposal Debora told the magazine

“My husband flew both of our families over Christmas to a huge chalet in Kitzbuhel, Austria. I was asleep, and at 5 a.m. he spent the whole morning covering the floor with 1,000 red rose petals. He played ‘Magic’ by Cold Play, which woke me up to find him on his knee at the bottom of the bed surrounded by roses. This later also became our wedding first dance song.”

At the time of the publication, Debora Krasniqi also revealed she was expecting the couple’s second child. The spouse and mother of two said they had been to the Maldives and Bahamas twice so for their honeymoon they were planning something different.
She and her husband and children lives in a £1.5m London home.

According to a profile, Debora Krasniqi is the founder/director at FDB Consulting. She calls herself on Instagram a ‘Nutritionista’ and writes on her bio ‘Informative page Sharing mummy lifestyle rants & advice’