Laura Merrill is the daughter of legendary vocalist, songwriter and actor -Alan Merrill -best known for co-writing the song I Love Rock and Roll.

Laura’s father is said to have died over the weekend from complication due to the coronavirus also known as Covdi19. He was 69.
It was Laura Merrill who confirmed her father’s passing in social media saying ‘I was given 2 minutes to say my goodbyes before I was rushed out’

Merrill was born Allan Preston Sachs in New York and grew up in Switzerland, Los Angeles and Japan before starting his music career in New York.
He wrote the I Love Rock and Roll song for his band, The Arrows, and recorded it in 1975. He had previously been in another band, The Lead.
In addition to his music, he hosted shows and had roles in soap operas; he also had a recurring part in the HBO series Encyclopaedia Brown. He also released several albums as a solo artist, with 2019’s Radio Zero the most recent.
Merrill played his last show just a few weeks ago according to Laura Merrill. 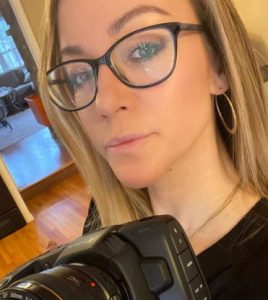 Laura Merrill and her brother, Allan Preston Sachs Jr. who goes by Allan jr. -were born from her father’s marriage to late supermodel, Cathee Dahmen. The two were married in the late 70’s.
Cathee was a sought after model in the 60’s and 70’s -she appeared on a number of covers including, Harper’s Bazaar and Vogue. Cathee who retired from modeling in the 80’s died in 1997.

Laura Merrill was born Laura Ann Sachs; in addition to her brother, Laura Merrill also has two older sisters on her mother’s side; Veronica Rose Dahmen who was put for adoption and is now known as Susie Fedorko, and Sarah Beth Whiting -born from her mother’s first marriage to British actor Leonard Whiting.

Laura Merrill is a professional photographer who often took photos of her father’s shows. According to her social media, she specializes in photography, entertainment, promotion and sales. She describes herself as a ‘Photographer, entertainer, singer, songwriter and fashion designer interested in creative brand development’
Laura who has her own website, has worked as a photographer for Shoot My Travel, for the past two years. She was previously a designer of SicBtch Apparel and was a singer for both Bli$$ Cover Band and KICK Band.
She studied fashion design at Fashion Institute of Technology.