Aireyona Osha Hill is the former wife of the latest police shooter, Gavin Eugene Long. Her 29-year-old ex-husband opened fire against at least six police officers in Baton Rouge over the weekend.

Her husband is accused of killing three law enforcement officers in Louisiana Sunday.

Reports say, it all began when police received a call of a “suspicious person walking down Airline Highway with an assault rifle,” Once police arrived, the shooting began.

The firefight took place in a part of town that the source described as rough. The area is a known drug trafficking area.

In an all black attire and carrying a rifle, Long confronted police; at least one dead officer was black –which goes to show the shooting might have not been race related.

Gavin Eugene Long died in the fire exchange with police. Sources say it was his birthday. He was born, July, 17,1987. He was a Kansas City native who as reported by CBS, was honorably discharged from the Marines in 2010, reaching the rank of E-5.

He was also known by the name of Cosmo Ausar Setepenra. He was the man behind a self-motivation website called “Convos with Cosmo.” On his site, Long reveals he left literally everything to a life changing journey to Africa. While there, he wrote three books. 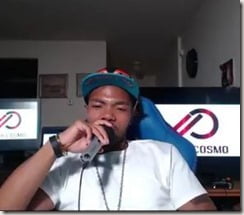 It is believed the latest incident is following the frightening and ongoing violence wave amid protests stemming from the Sterling shooting and the shooting by police of Philando Castile in Minnesota, plus the ambush on Dallas police officers on July 7 in which a sniper killed five officers.

The reasons that moved Aireyona’s former living partner to perpetrated this heinous crime are still not clear. According to the Daily Caller, a YouTube account ran by Gavin shows that he was a former Nation of Islam member. He also ranted against “crackers” and made references to Alton Sterling.

Apparently there was a time when Long lead a more normal life. He listed a San Diego address on his 2009 marriage license application, according to a document obtained by City News Service.

In the document, Long’s wife, Aireyona Osha Hill, listed her age as 20 and her home as Kansas City. Both listed the marriage as their first. Long, who was 21 at the time, listed his highest level of education as two years of college. Accoridng to his LinkedIn, he attended the University of Alabama, he graduated from Central Texas College in 2011 with an associate’s degree, and also studied at Clark Atlanta University from 2012 to 2013.

The former couple was allegedly married from 2009 and separated in 2011 after a divorce petition was filed.

Can you picture Aireyona Osha Hill now 27-years-old and how relieved she must feel to have had her marriage with Long ended. Hill is yet to make any public statements.

Authorities are still investigating whether Long acted alone. Initial reports said that three men may have been involved.
His Twiter account can still be found here.