Abu Ishaq & Abu al Baraa al Masri have been identified as the two suicide bombers responsible for the killing of 44 people and turning Palm Sunday services into scenes of horror at two Coptic churches in northern Egypt.

According to news outlets, the Islamic State group claimed responsibility for the massacre. They said in a statement that two Egyptian suicide bombers named Abu Ishaq al Masri and Abu al Baraa al Masri carried out the church attacks.

Video from inside the church broadcast by CBC TV showed people gathered around what appeared to be lifeless, ****** bodies covered with papers. Several doors had been blown off. Women wailed outside.

A few hours later, a suicide bomber believed to be Abu Ishaq al Masri rushed toward St. Mark’s Cathedral in the coastal city of Alexandria, the historic seat of Christendom in Egypt, killing at least 17 people and wounding 48. 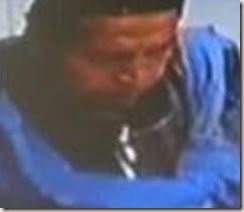 CCTV images showed a man with a blue sweater tied over his shoulders approaching the main gate to St. Mark’s and then being turned away by security and directed toward a metal detector. He passed a female police officer talking to another woman, and entered a metal detector before an explosion engulfed the area.

According to Al Arabiya TV, Abu Ishaq al Masri was born in September 1990 in Manyat Al Kamh. He holds a Bachelor Degree in Commerce.

He worked as an accountant in Kuwait for four months then he traveled to Turkey then to Syria on December 26, 2013. He later returned to Sinai. 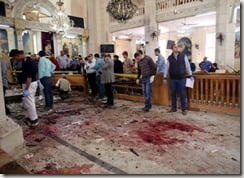 Abu al-Baraa al-Masri, the one responsible for the blast at the church in Tanta –was born on December 13, 1974 in the town of Abu Tabel in Kafr El Sheikh.

Abu al-Baraa went to Syria on August 15, 2013 and he had traveled to Lebanon then returned to Syria.

He graduated with an industrial secondary school diploma. He is survived by a wife and three children.

As result of the tragic event, President Abdel-Fattah el-Sissi called for a three-month state of emergency during a press conference late Sunday night.

Christian in Egypt make up about 10 percent of Egypt’s population, the attack marks the government’s lack of protection on Christian communities.