Abdou I is the man police has been hunting in link to the mysterious death of Lauren Mann –an American student living in Vienna, who was found dead inside her apartment last month.

Lauren Mann who worked as a nanny, apparently was helping Abdou I by letting the African, stay at her place and ultimately, to prevent his deportation. He was arrested by authorities who found him at a refugee center in Switzerland.

Police has only identified the Gambian native as, 24-year-old Abdou I, and no official photo has been released yet.

Lauren Mann’s autopsy she died suffocated. As previously told in another post, her body was strangely found on the bed inside her apartment on Tuesday January 26th; she was naked –which prompted police to say she was the victim of a sexual game gone wrong. That theory was immediately rejected by her family and friends, describing her as a sweet and kind young woman.

Now that theory seems to have been dropped, after announcing she was a victim of murder.

Abdou I was taken into custody Thursday. He was in Australia illegally authorities report, though Abdou I and Lauren were sharing her apartment, the nature of their relationship is still not clear.

Accroding to Kronen Zeitung reports, it is not the first time Abdou I finds himself in trouble with the law. The suspect has previously faced *** abuse charges in Germany. 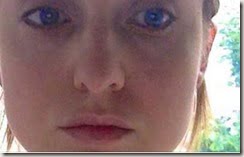 According to authorities, the Gambian was living at Caritas refugee centre in Erdberg and was scheduled to be deported back to his home country in Africa. There was already a warrant out for his arrest at the time of the murder and it is through that Lauren M. had hidden him in her small one bedroom home so that he could escape deportation.

Abdou I. was captured by police in an asylum centre in Switzerland. Police used the GPS location of photos he posted online to find his exact location. He is said to have hidden among fellow migrants following the murder before making his way to Bern where he was eventually caught.

Prosecutors in Vienna have requested Abdou’s extradition from the Swiss authorities.