Lina Valentina is the girlfriend of musician Aaron Carter; the younger brother of Backstreet Boys Nick Carter. However, Nick announced they were no longer together in July, Lina apparently didn’t take the breakup lightly.

Prior to Lina, Aaron dated Madison Parker and had an on and off relationship with Hilary Duff for a few years. He was also romantically linked to Lee Karis. He also revealed last summer that he finds both men and woman attractive. 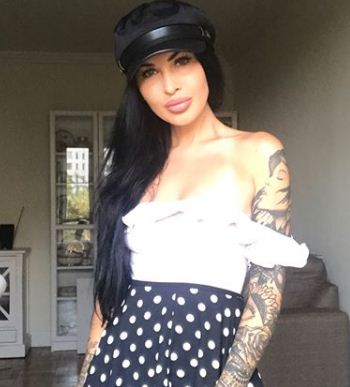 Lina and Aaron have been dating for a short period of time; however, the two recently revealed they are expecting their first child together, Nick eventually revealed that they were not anticipating a baby in December 2018. They reportedly began dating in September 2018.

Lina who has both arms covered in tattoos –is a Russian born beauty and like her man; she is also into the arts. According to her website, she previously lived in Spain and has been interested in the arts since she was a teenager. She paid tribute to her grandmother –who passed in Russia –by using her name, Valentina.

Her favorite art media is acrylics, in addition to painting on canvases, Lina has also painted murals that could be found in NYC, Brooklyn and LA.

Lina’s artistic varies from contemporary art to surrealism; the stunner speaks three languages and has attended SCSU, Paier College of art and FIT. You can check out her work here.

Lina Valentina is also quite popular on social media with over 40k followers on Instagram.

Carter said he and Lina were no longer dating late in July; according to TMZ, the news of the breakup came just a few days before Nick said Lina allegedly attacked him at his home on July 31, around 2 AM.