Kim Yo-jong is the younger sister of North Korean president, Kim Jong-un –who recently made an appearance at the Olympics in PyeongChang.

Kim Jong Un’s younger sister, Kim Yo Jong, shook hands with South Korean President Moon Jae-in in the VIP section at the stadium as the ceremony began, multiple reports say. This simple action is history in the making since she becomes the first member of the Kim family to ever set foot into South Korea. But what else do we know about the sister of North Korea’s leader? Not much, since the Kim family are known to be extremely hermetic.

What is widely known however, is that she is her brother’s top adviser and number one go-to person.

There are some interesting facts you’d enjoy about the younger Kim. Like her brother she was born to the late leader, Kim Jong-il and his wife Ko Yong-hui –on September 26, 1987 in Pyongyang, North Korea. Some sites however say her birthday isn’t accurate as she could be 29, 30 or 31 –years-old.

Her father is said to have referred to her as “sweet, sweet Yo Jong” and “Princess Yo Jong.” Her late father was delighted she had shown interest in a career in politics. She was present for her father’s funeral in 2001.

Kim Yo-jong was educated abroad, according to the Washington Post, attended school in Bern, the Swiss capital. She attended the Liebefeld-Steinhölzli public school, the same school as Kim Jong Un. During her time as a student in Berlin she received ballet lessons and used the alias Pak Mi Hyang. 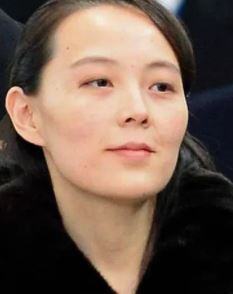 She is said to be closest to her brother, Kim Jong Un as they bonded through their time in Berlin. After the siblings returned to their home country in the early 2000’s, Kim Yo-jong completed special classes at Kim Il Sung University in Pyongyang.

Following her father’s death, she began helping establish Kim Jong Un’s hereditary succession campaign in 2010 and 2011, working in the National Defense Commission. She currently serves as the officially deputy director of the Propaganda and Agitation Department of the Workers’ Party of Korea, the communist organ that runs the state. In this role, she makes sure that her brother, Kim Jong Un is presented as a strong leader and that everything runs smoothly.

As for personal details, Kim Yo-jong is said to be a married woman and the mother of at least one child. Some South Korean and Japanese newspapers have reported that she has been married since 2014 to a finance official named Choe Song, the son of senior official Choe Ryong Hae.

However her career in politics is not as smoothly as it seems, according to the BBC, she is on a US sanctions list over alleged links to human rights abuses in North Korea.