Kevin Wright has been identified as the new man in the life of actress, Gina Torres –who was married to Laurence Fishburne for over a decade.

Gina shocked fans after she and a mystery man were caught kissing earlier this week –while the world believed she and Fishburne were still hitched. The Suits star quickly released a statement confirming she and the Matrix actor, quietly split in 2016. The 48-year-old told People

“With heavy hearts, Laurence and I quietly separated ““There are no bad guys here. Only a love story with a different ending than either one of us had expected.”

Gina Torres and Laurence Fishburne were married in 2002. During their marriage they became parents to daughter, Delilah –born in 2007. The Oscar-nominated actor also has two children from a previous marriage: Montana and Langston Fishburne. 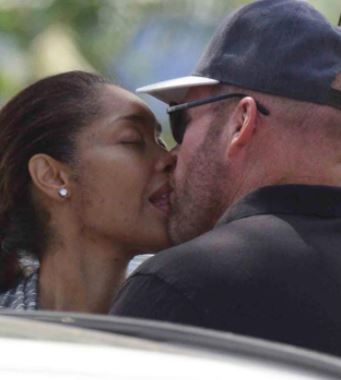 Laurence and Gina have acted together in various projects over time, namely The Matrix Reloaded in 2003 and more recently in the TV show Hannibal from 2013 to 2015.

As much as we loved the Hollywood couple, Gina has certainly moved on and its time we introduce you to the new guy, Kevin Wright.

A source told Page Six, the new couple met on a Southern California beach about a month ago and have been dating ever since. The source added they bonded because they both come from ending long term relationships.

Apparently Kevin Wright used to be a married fella. He and his wife were together for 20-years and he is the father of six children. He ended his long-time-marriage two years ago.

Mr. Wright is a businessman originally from Utah but currently resides in Southern California. He has been in the real estate business for a long time and is also a solar energy investor.

Will these two be a good match? Comment below