Veronica’s tenor husband is widely known for being one of the most successful opera singers; though blind since he was a child, Bocelli has stunned audiences around the world with his magnificent talent and charm.

The Italian power couple has been hitched for a few years; for more intel about the couple including their careers, personal details, their net worth and achievements, keep on scrolling down.

Veronica Berti is the gorgeous wife of famous opera singer, Andrea Bocelli. The two have been married less than a decade ago following a long courtship. Together they are the proud parents of one child.

Andrea Bocelli wife, Veronica Berti is best known for being married to the famous singer-songwriter, however, she knows a thing or two about the entertainment industry. 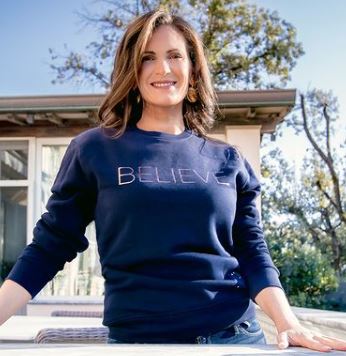 The two first met in 2002 and quickly began dating. By 2011, after many years of relationship, Berti announced she was pregnant with the couple’s first child. Their daughter, Virginia was born in March of 2012.
In 2014, two years after the birth of their daughter, the couple tied the knot at the Sanctuary of Montenero in Italy.
After the ceremony all guests retreated to the newlywed couple’s home in Forte dei Marmi near Pisa for the wedding reception.

Veronica Berti was born in 1984, she is the daughter of Ivano Berti. Not much more is known about other relatives.

According to online sources, Veronica has a net worth of approximately $1 million.

How successful is Veronica Berti?

In terms of marriage, Veronica has been in a relationship with the acclaimed tenor for nearly two decades. According to Andrea, the glue that keeps them together has always been music ‘discussing, performing, and listening to it together.’ 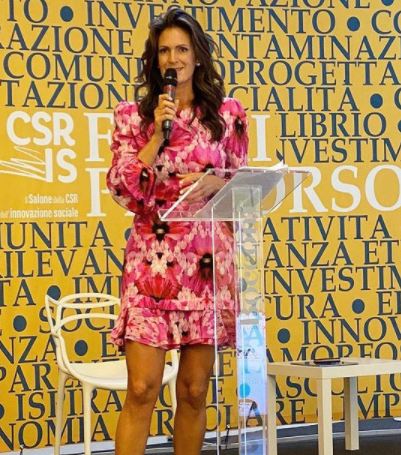 In terms of her career, Berti has also led a successful career, managing her husband’s affairs.
The two have even performed together; in 2012, the same year they welcomed their daughter, Virginia, into the world, they famously performed a beautiful rendition of the love song “Qualche Stupido.”

Veronica Berti met her then future husband at a party and according to The Guardian, he sang to her on that night.
He’s said he was attracted to her for her voice and the way her skin felt.

The two have been together since she was 18-years-old. 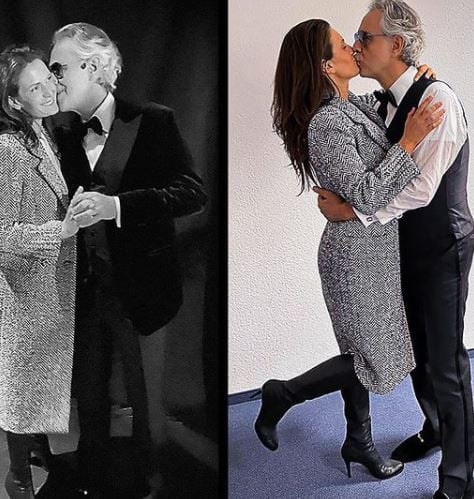 Bocelli revealed during an interview, they both listen to the same type of music so talking about music is something they both do often.
Veronica said about the night they met:

I was 18 and meant to be going somewhere else that night. Everyone was late because of bad weather, so I sat by the piano in an empty room. Andrea sent a friend to ask me to come to his table. We talked about music and where I was born. I used the formal “you” instead of the friendly “you”, and he kept saying to everyone: “Why is she speaking to me like that? We are almost the same age.” I did it out of respect. I had an exam coming up, so I had to go, but he didn’t want me to. “Stay,” he said. “Don’t lose the energy. Don’t lose the moment. Love is something you don’t think about.” So I stayed.

While there, Andrea sang an aria for her, a piece called Occhi Di Fata (Fairy’s Eyes). The much older tenor also said of their first encounter

‘effectively the marriage began when we met’

Veronica Berti has had no other man in her life except Andrea Bocelli.

Veronica Berti is 37-years-old, that means she is her husband’s junior by 25-years.
The stunning brunette stands at 5 foot 6′ or 1.68 m. Her weight is approximately, 62 Kg.

Veronica Berti is often described as an Italian actress and producer; she has made a number of TV guesst appearances and has also been featured on her husband’s documentaries, Andrea Bocelli Live from Florence and Celebrity Fight Night in Italy.
She appeared as herself in the TV series ‘Great Performances’ which has been running since 1971. 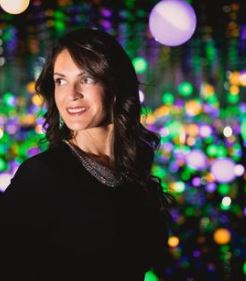 Veronica Berti isn’t also Bocelli’s wife and mother of his child, she’s also his manager. In 2006, Andrea made Veronica the manager and CEO of his currency management office, Almud.
In addition, she serves as the vice-chairman for the Andrea Bocelli Foundation.

She is heavily involved in numerous charitable works like building of hospitals for the underprivileged. She and her husband launched their project Voices of Haiti in partnership with the Foundation St. Luc in order to empower the people hailing from the remotest and poorest communities of the Haitian island. 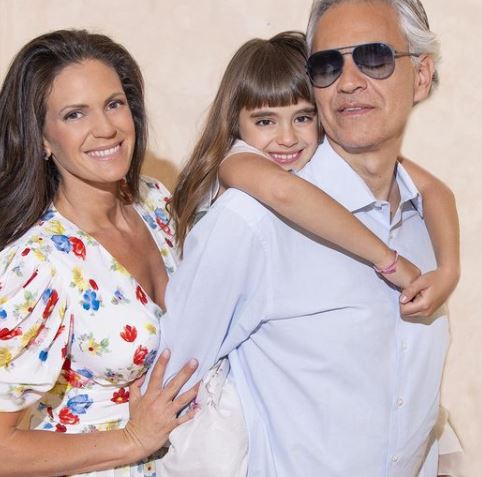 In 2014, Andrea and Veronica received the “UNCA Global Citizens of the Year” for their constant commitment with the Andrea Bocelli Foundation that since 2011.

Where does Veronica Berti live?

Andrea Bocelly and wife Veornica along wiht their daughter, are longtime residents of Tuscany. The couple also owns properties in Miami.

What does Veronica Berti do now?

Most recently, Andrea Bocelli wife Veronica Berti has been focusing her efforts on raising money for COVID-19 relief efforts through the Andrea Bocelli Foundation.
It’s clear Veronica and her husband care very deeply about giving back.

Andrea Bocelli was born September 22, 1958, in Lajatico, Italy. Just months after his birth, he was diagnosed with congenital glaucoma.

He grew up on a farm selling equipment and making wine. He began to play piano when he was six years old.
As a child, Andrea Bocelli learned to play the piano, flute and saxophone. 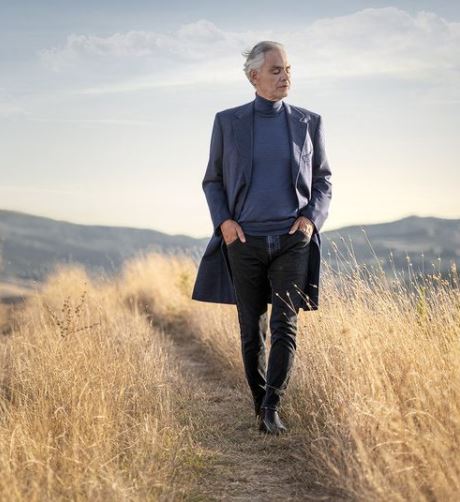 He attended University of Pisa and became a court-appointed lawyer after graduation. The gifted singer did not abandon his music, however, as he studied with Franco Corelli and took up playing piano in bars to pay for his lessons.

His big break came when a demo tape landed in the hands of Luciano Pavarotti. His 1995 album Bocelli sold well in Europe and 1999’s Sogno became an international hit. He remains one of the world’s most popular singers today.

Andrea Bocelli Net Worth in 2021

The Italian tenor, singer-songwriter, and multi-instrumentalist has a net worth of approximately $100 million.

How successful is Andrea Bocelli?

Regarded as one of the most famous opera singers today, Andrea Bocelli enjoys a distinguished place in the musical world.
He is considered to have one of the most beautiful voices in the world and has released many successful albums. Bocelli has shown his versatility over the years, collaborating with various artists across many genres, including mainstream pop music. 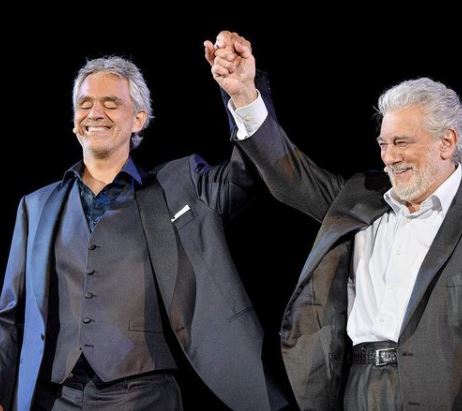 Where can I find Andrea Bocelli

As active as ever in his 60’s, Andrea stays updated with the music trends and has a huge following on social platforms.

He keeps active on Instagram where he has over 1 million followers.

He can also be found on Twitter, with over 200k followers.

He also has his own YouTube channel, with over 4 million subscribers.

Andrea Bocelli and wife Veronica Berti have been husband and wife for the past seven years. She is his second and current wife.

Prior to Berti, Bocelli was previously married to Enrica Cenzatti, whom he split from in 2002. From his first marriage, Bocelli is the father of two children, sons Amos and Matteo. Amos was born in 1995 and Matteo in 1997, both Bocelli brothers are into music. 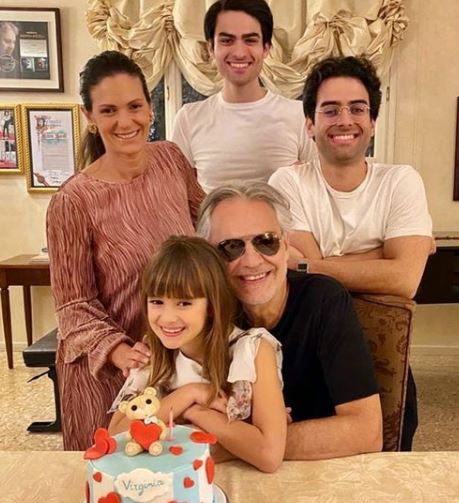 Amos Bocelli, Andrea’s oldest son, is also a musician. He plays piano on acoustic versions of ‘Sono Qui’ (I Am Here) and ‘Ali de Libertà’ (Wings of Freedom).

Matteo appears on Andrea Bocelli’s single ‘Fall on Me’ from the  album Sì. The pair sing in English and Italian in a heartfelt tribute to each other. Matteo also sings on the album track ‘Ven a Mi’ with his father.

Bocelli who became completely blind at the age of 12, had his big break when a demo tape landed in the hands of late, legendary Italian star, Luciano Pavarotti.

Bocelli had his first taste of success in a singing competition in 1970.

In 1992 when he recorded a demo tape of “Miserere” for Zucchero Fornaciari, the song co-written by U2’s Bono.

His duet with Celine Dion for the animated film The Quest for Camelot won them both a Golden Globe. 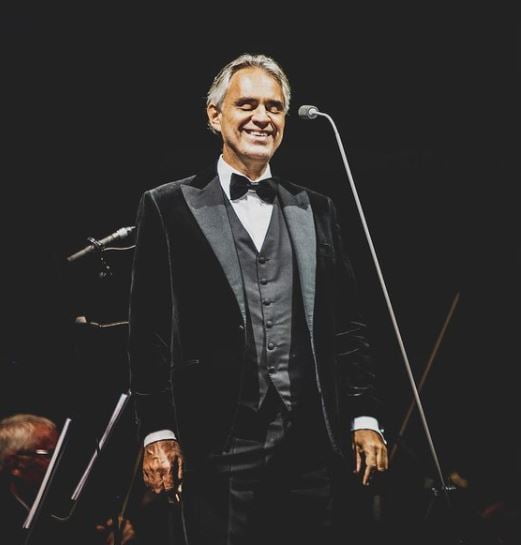 In 2013, Bocelli collaborated with Jennifer Lopez and Nelly Furtado on his album Passione. He also joined forces with Placido Domingo and Ana Maria Martinez on 2014’s Manon Lescaut.
In 2015, Bocelli released Cinema, his 15th studio album.

Thourght his career, Bocelli has received numerous awards and honors. Some of them for his musical tranjectory and other for his philanthropic activity.

In 2010, Andrea Bocelli was given a star on the Hollywood walk of fame for his contributions to the entertainment industry.

In 2015, he was honored with the Crystal Award; the Italian tenor received the prestigious award that is annually awarded to an artist of global importance.

In 2019, he received Variety’s inaugural Intl. Achievement in Music award. 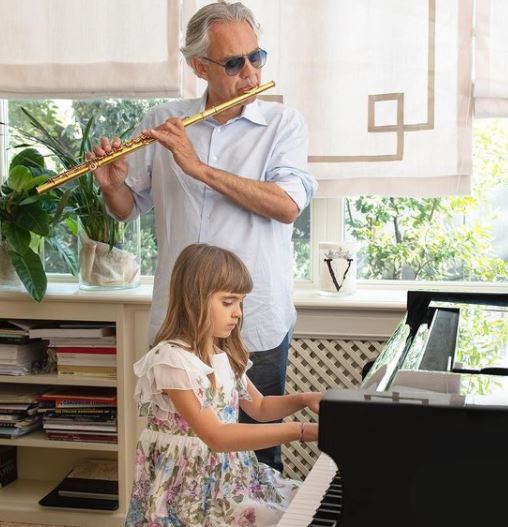 What does Andrea Bocelli do now?

Andrea keeps busy with his music, in 2020, the 62-year-old gifted the world with an amazing vocal performance during his Bocelli: Music for Hope concert at the Duomo Cathedral in Milan, Italy.

In December of 2020, he and Virginia Bocelli sang ‘Hallelujah’ at Teatro Regio di Parma.