Aurora Mulligan is the gorgeous girlfriend of TV star, Matt LeBlanc. The two have been dating for a while and make one hot couple. Find out if there are wedding bells in the horizon for these two!

Miss Mulligan is also in Television business. Thought she could be an actress with those looks, Aurora Mulligan stays in the background as an assistant producer for the BBC.

Mulligan and Matt happen to work together. She is a producer for the BBC show, Top Gear –which is hosted by LeBlanc.

Her alleged boyfriend has had a busy romantic life that includes an ex-wife and a couple of high profile relationships. LeBlanc is also a father.

The 50-year-old actor, producer and comedian is well remembered for his work on the hit show, Friends. Following the success of the NBC sitcom, LeBlanc embarked on a show inspired on his Friends character, Joey –which aired for two seasons.

The Newton, Massachusetts native began his career as a photo model and later landed an acting role.

LeBlanc also created a production company called Fort Hill Pictures. He took a five year break from acting and in 2011 came back to TV with a new show, Episodes. He took home the 2012 Golden Globe for Best Actor in a TV series and was also nominated for four Primetime Emmys.

In 2016 he became the presenter of Top Gear after appearing in the show for the first time in 2012. Other projects also include the sitcom, Man with a Plan –which aired on CBS in 2016. 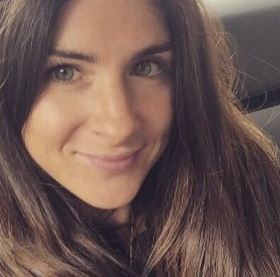 Matt is also the proud father of daughter, Marina with Melissa McKnight. The two were married for three years before divorcing in 2006. He then dated actress Andrea Anders from 2006 to 2015.

Getting back to the lovely Aurora, she and LeBlanc have allegedly been dating since last June. They made their first public appearance this year at the 2017 Tribeca Film Festival.

Aurora who was born in County Fermanagh, Northern Ireland, holds a political science and government degree from Liverpool University. Following her graduation she launched a successful career in TV production.

Before arriving at BBC, she worked for ITV and channel 5. According to the Mirror the pretty brunette and Matt, hit it off right away after meeting in early 2016. Aurora who is 32-year-old is about 17-year-his-junior.

Are you a fan of the couple?

Check out the pretty Aurora Mulligan on Twitter here.